What are Invasive Polychaetes?

Polychaetes are primarily marine segmented worms found at all depths ranging from the supratidal down to the deepest oceanic treaches. While many polychaetes crawl in or amonst the sediments, others are mainly or completely sedentary and live in mucous, muddy, or calcareous tubes.

Native (indigenous) species are naturally distributed within a region. Because in Australia the marine fauna is not well known, boundaries of native ranges can be somewhat flexible. A non-native (alien, exotic) species found beyond its native range as a result of movement assisted by human activity is called an introduced species. A species which is neither demonstratively native nor introduced is a cryptogenic species. A non-native species that has initially established in Australia may remain non-invasive, i.e., localised within a new region. If a non-native species continues spreading within a new region, it becomes invasive. Bioinvasions include both range expansions of native species and the spread of an invasive species. A marine pest is a noxious invasive or native marine species that threatens environmental, economic, or social values.

Most known invasive polychaete species in Australia belong to the families Serpulidae, Sabellidae, and Spionidae.

A recent key to the families can be found at (http://www.environment.gov.au/biodiversity/abrs/online-resources/polikey/index.html).

How do invasive species arrive in Australian waters?

Species have been unintentionally translocated for centuries on drift algae, floating wood, pumice or as fouling organisms on ship hulls. Others, such as mud worms, have been relocated when stocks of shellfish were moved around, together with their pests or associated species. With the advent of bulk carriers in the 1960s the rate of introductions increased substantially. These ships are specialized to carry a single specific type of cargo and so would be fully loaded on their export voyage, but return home empty. As these ships discharge their cargo, they need to take on board ballast water for stability. This water from a foreign port is then discharged into the home port as a new consignment of cargo is loaded and this cycle is repeated many times. Many of these routes are well established with a port receiving ships and their associated ballast water from the same overseas port many times a year.

Each year around 150 million tonnes of ships' ballast water is discharged into Australian ports by 10 000 ship visits from some 600 overseas ports. Most shipping into Australia arrives from the northern Pacific area, with the greatest volume of ballast water being discharged by bulk carriers. Not only is ballast water discharged, but also any larvae that were in the water column. While most of these larvae do not survive, some settle and establish viable populations. Invasive species can also be introduced via hull fouling. Individuals attached to the hull may become dislodged or spawn, releasing gametes or juveniles into the water column. Since the late 1980s the shipping community has become increasingly aware of the costs of hull fouling which greatly increases fuel consumption. This coupled with increasing fuel costs has led to ships being cleaned regularly. This was also linked to the phasing out of some antifouling paints. So while cleaning frequency has increased, there are some difficult places to clean such as around anchors and chain lockers where fouling species may remain.

Oil drilling rigs which are stationary for long periods of time before being towed to a new site are another source of introduction, as are any other structure such as laid up ships.

What problems do invasive species cause?

Port and quarantine authorities in Australia and overseas are increasingly concerned about introduced species which include a range of polychaetes. While only some of introduced species become invasive pests, for many others, we just do not know what impact, if any, they are having on the native ecosystems. One thing is certain is that once these introduced species have arrived and become established, it is almost impossible to eradicate them. Therefore, early detection of an introduced species is critical.

How can you help solve these problems?

By using our Invasive Polychaetes Identifier you will be able to quickly and accurately distinguish between non-native and native Australian species. Identification of species as non-native can lead to triggering various responses aimed to remove these species and prevent them from becoming established. 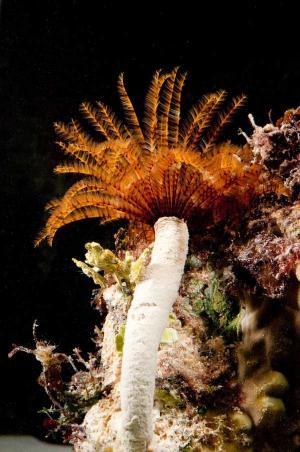 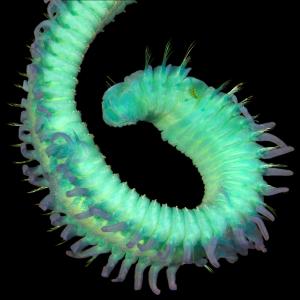 Polydora uncinata (stained with methyl green), originally from Japan, has recently been found in Australia.