Polychaetes exhibit tremendous morphological diversity, but there is a general body plan common for all of them. The polychaete body consists of three basic regions: anterior region or head (prostomium and peristomium), trunk with a number of segments, and posterior region (pygidium). Prostomium (Greek prostomion, mouth, lips and pro-, in front ) is located dorsally before the mouth and it may bear eyes or appendages such as palps, cirri, tentacles or radioles. Peristomium (Greek peri- around and stoma, mouth) located behind the prostomium bears the mouth ventrally. The ventral part of a polychaete body is where the mouth is located and the dorsal part is on the opposite side. The polychaete trunk consists of a variable number of segments, each bearing paired lateral outgrowths called parapodia (Greek para, beyond or beside and podia, feet). The parapodia are basically biramous, meaning they have two branches (rami), the dorsal branch is called notopodia and the ventral branch is called neuropodia. In some families the parapodia have have been reduced to a single branch and are referred to as uniramous. Typically each parapodium has supporting aciculae (although these may be absent) and chitinous bristles called chaetae (Greek chaite, long hair), the dorsal chaetae are notochaetae and the ventral chaetae are neurochaetae. Chaetal morphology and arrangement are the main diagnostic characters of polychaetes. Pygidium (Greek pugidion, diminutive of puge, buttocks) is the terminal body-part surrounding the terminal anus. 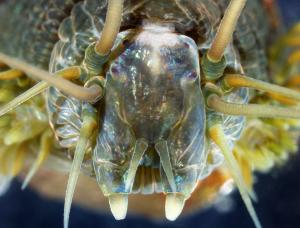 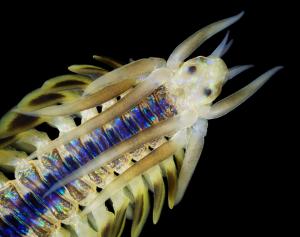