Dr Pat Hutchings is a Senior Principal Research Scientist at the Australian Museum. She became interested in invasive species in the late 1980’s and undertook a 3 year invasive species survey of Twofold Bay, NSW, Australia. The local fisherman were concerned that species were being introduced into the bay as ballast water was being discharged as wood chips were being loaded and this proved to be true.  Particular sites around the Bay were identified as being most at risk and this led to a series of Guidelines as to how to conduct a survey for introduced pests. For several years Pat served on the national ballast water committee, which developed voluntary guidelines for the discharge of ballast water. Subsequently surveys of all major ports in Australia were undertaken and Pat co-ordinated the survey of Sydney harbour as well as identified polychaetes from many other port surveys. This work highlighted the importance of accurately identifying species and the need to develop tools to distinguish between native and introduced species. This is critical in Australian waters where much of the fauna still remains undescribed. All this encouraged the authors to develop this digital guide to help the non-specialist identify their species of concern and to develop good lines of communication between the users and the specialists. Pat developed general introductory parts of the guide, edited all chapters and, along with Dr Maria Capa co-authored the Sabellidae part of the guide.

Dr Elena Kupriyanova is a Research Scientist at the Australian Museum. Before joining the Australian Museum, Sydney in 2010, she held a position of an ARC post-doctoral research associate at the University of Adelaide (2005-2007) and a JSPS Postdoctoral Fellow at Yokohama National University, Japan (2008-2010). Dr Kupriyanova’s research interests centre on biodiversity and evolution of marine invertebrates, including evolution of life histories and integrative systematics. She is an expert in the evolution and systematics of serpulid tubeworms.  Her past research projects include taxonomic revisions, molecular and morphological phylogenetic analyses, as well as theoretical and experimental studies of reproduction and life histories in marine invertebrates. Her research at the Museum has focused on barcoding of an important genus of fouling and invasive polychaetes, studies of evolution of abyssal fauna and biomineralisation in the deep sea, as well as revisionary studies of poorly known groups of Australian polychaetes. She coordinated content development of the digital guide, edited chapters on individual families and, along with Dr Harry ten Hove, co-authored the Serpulidae part of the guide.

Dr Maria Capa is a researcher at the Museum of Natural History and Archaeology, NTNU, Trondheim, Norway. She previously worked in the Australian Museum as Postdoctoral Fellow sponsored by Fulbright/Spanish Ministry of Education and Science (2005-2007) and a postdoctoral researcher funded by an  Australia Biological Resources Study (ABRS) grant (2008-2011). Dr Capa’s scientific interests are as broad as general invertebrate zoology and marine biology, but she concentrates her research on marine annelids and also other benthic marine invertebrates. Maria is interested in the assessment of phylogenetic relationships of polychaetes at different taxonomic levels and for that she tries to combine different sources of data available. She is currently working on different projects dealing with species boundaries with the aim of revealing the diversity of particular groups of polychaetes and their distribution, including recent translocations. Some of the groups of polychaetes that she is working with at present include sphaerodorids, sabellids, oweniids and sabellariids. Maria developed the Sabellidae part of the digital guide.

Dr Harry ten Hove is an associate researcher at Naturalis Biodiversity Center, Leiden, the Netherlands. Harry is a world expert on taxonomy and distribution of serpulid polychaetes. As a Masters student at the University of Utrecht (1964), he became interested in serpulids, and never lost this passion. After 20 years of teaching Invertebrate Zoology and coastal biology in the UU, he switched to the University of Amsterdam, Zoological Museum (ZMA). Here he combined his research in serpulids with a course in Tropical Ecology, marine biology, and varied managerial tasks. After his official retirement he stayed on as associate researcher at the ZMA, which has been integrated with Naturalis for almost 2 years. He took part in several (oceanographic and diving) expeditions to collect polychaetes in subtropical and tropical areas, Caribbean, Atlantic, Indian Ocean, Indonesia and Australia. In 1990 M.N. Ben-Eliahu and he sampled the Israeli coasts to investigate the distribution of Lessepsian migrants, Indo Pacific species which arrived in the E. Mediterranean via the Suez Canal. He co-authored the Serpulidae part of the guide with Dr Elena Kupriyanova.

Dr Vasily Radashevsky is a Research Scientist at the A.V. Zhirmunsky Institute of Marine Biology (IMB) of the Far Eastern Branch of the Russian Academy of Sciences in Vladivostok, Russia. Vasily studies morphology, ecology, reproductive biology, and evolution of spionid polychaetes, which easily survive and are transported worldwide with ships in ballast water and also hitchhike on aquaculture stock. He became interested in invasive species in 2000 when he participated in Puget Sound / Willapa Bay Exotics Expedition 2000 in Washington, USA, and also in the Project ALARME on invasive species in ballast waters in the port of Paranaguá, Brazil. As a member of PICES Working Group 21 on Non-indigenous Aquatic Species, Vasily participated in international Rapid Assessment Surveys on invasive species in China, USA and Russia in 2008, 2009 and 2011, respectively. Vasily is responsible for Spionidae part of the guide.

Dr Carol Simon is a Senior Lecturer at Stellenbosch University, South Africa. She has been working on shell-infesting polydorids since 2004, as the infestation by these species increased on locally farmed abalone.  She has investigated the population dynamics of pest species, then tried to determine their origin using molecular methods and conducted surveys of the polydorids that are present on wild molluscs as well. Now her research includes the species that are pests on cultured oysters. This has automatically led her to working on alien polydorids. She has described three new and three alien species associated with molluscs and suspects there are more out there. Carol and her students are currently investigating the effects of the effluent from abalone farms on the species diversity in the outflow path, the spread of worms associated with farmed oysters, and the identification and spread of non-indigenous species in South Africa.Carol contributed to the Spionidae part of the guide.

Dr Waka Sato-Okoshi is an associate professor at the Graduate School of Agricultural Science, Tohoku University, Sendai, Japan. After she got her PhD, she worked at the Natural History Museum of Chiba as a chief curator of Invertebrate Zoology before returning to the University as an academic staff. Since then she has focused on ecological studies of various marine benthic animals associated with human activities. She investigated worms while visiting international institutes such as University of Alberta (Canada), Murdoch University (Australia), Chile JICA (Chile), Universidad la República (Uruguay), and Kasetsart University (Thailand). Her interests now focus mainly on the transportation of shell boring spionid polychaetes which accompany commercially important mollusc shells. She tries to confirm which species damage the shells using molecular analyses and to monitor these dangerous species. Dr Sato-Okoshi is involved in the project of “Environmental and faunal changes before and after the Great East Japan Earthquake”. Waka contributed to the Spionidae part of the guide.

Ms Eunice Wong is a research assistant at the Australian Museum.  She has participated in research projects on different invertebrate fauna, and has a keen interest on early development in marine invertebrates. Prior to her work on invasive polychaetes, her illustration work included morphology and anatomy of micromolluscs, as well as developmental stages in live abalone larvae and embryos as her BSc Honours project at University of Sydney.  Eunice was responsible for the vast majority of microscope photography and illustrations for the guide. 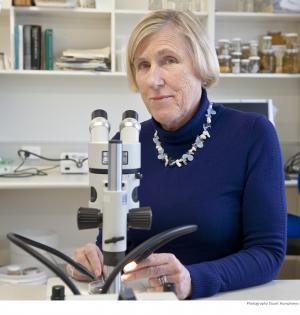 Dr Pat Hutchings has been working with polychaetes for well over 40 years. Photo: ©Stuart Humphreys 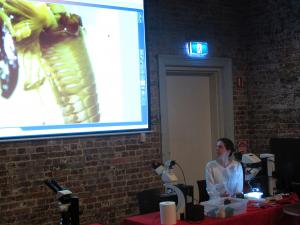 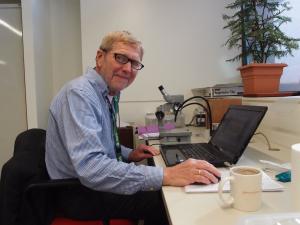 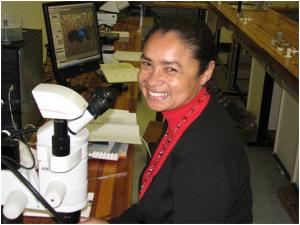